Canberra is set against an outstanding backdrop of the spectacular Brindabella Ranges, home to Namadgi National Park and the world renowned Tidbinbilla Nature Reserve. The natural bushland reaches all the way into the city of Canberra, along the ridges, hills and through the native grasslands that separate the suburbs, creating a unique cycling destination.

View from Marion Mahony Griffin View on top of Mount Ainslie. The Australian War Memorial can be seen in the centre, just behind the handrail, with ANZAC Parade leading to Lake Burley Griffin and both the ‘Old’ white and ‘New’ Parliament Houses behind. The Brindabella Ranges are on the skyline.

Canberra has something to offer everyone, from the iconic national museums and galleries to nature based tourism and adventure experiences, a multicultural collection of foods, cool climate wines, boutique brewing and, in more recent times, hand crafted spirits.

And the best thing about Canberra’s small size is that all of the attractions and foodie hot spots are only moments away from each other and are all safely accessible by bicycle using an extensive network of footpaths and shared walking and cycling paths. This includes the 145km Canberra Centenary Trail, which loops through the city and Canberra Nature Park providing some of the best views of Canberra and the ACT.

For gravel and mountain bike touring Namadgi National Park and the Canberra Nature Park have more than 200km of accessible fire trails that are ideal for short or multi-day tours. The Bicentennial National Trail, Australia’s premier long distance and multi-use touring route between Tropical Far North Queensland and Victoria, uses some of these trails.

A stone’s throw away in surrounding NSW there is an abundance of both sealed and unsealed roads suitable for day trips or multi-day on-road bike rides. It is not hard to find a route that passes through at least one historic village providing an opportunity to enjoy the region’s world-class wineries, smoked goods, chocolates, and truffle farms.

For the more adventurous or those looking for something more strenuous the ACT is home to the Fitz’s Challenge, one of Australia’s toughest cycling events with five epic hill rides to choose from – 50 km, 105 km, 165 km, 210 km and 255 km. You can ride the routes at any time of the year or join more than 1000 riders on the last Sunday in October.

There is really no other place in Australia where all the cycling is so close together making Canberra and the ACT a perfect short break cycling destination.

Canberra sunset over the Brindabella Ranges

About the Australian Capital Territory

The Australian Capital Territory (abbreviated ACT) is the seventh most populous (0.4Million) and the smallest of the 8 Australian States and Territories.

The ACT is an enclave being completely surrounded by New South Wales and accounts for less than 1% or only 2,358km2 of Australia’s landmass. The ACT is not part of NSW.

Canberra, Australia’s capital city and the nation’s largest inland city, is located within the ACT.

Canberra is unique in Australia in being a planned city and being so close to the surrounding bushland it is affectionately known as the “Bush Capital”. To reinforce this title, 66% of the ACT is either designated national park, nature reserve or rural land. The remaining 34% of the ACT is covered by the city of Canberra and the tiny rural villages of Tharwa, Hall and Uriarra. There are no other towns or villages in the ACT.

Although technically incorrect you will find the locals using the terms ACT and Canberra interchangeably.

Why is Canberra the capital of Australia?

On 1 January 1901, after years of debate, the 6 colonies in Australia joined together to form the Commonwealth of Australia with Melbourne being agreed as the temporary capital city. Elections were held for the new Parliament of Australia and on May 9, 1901, the first parliament was sworn in.

Due to historical rivalries between Sydney and Melbourne the new Constitution required a new capital city be constructed away from the existing state capitals.  On January 1, 1911, the Federal Government created the Federal Capital Territory as the site for the future capital and announced an international design competition to design the new capital city.

In 1913 American architects Walter Burley Griffin and Marion Mahony Griffin were announced as the winners of the competition and the new capital city was officially named Canberra on March 12, 1913.

On May 9, 1988, the Federal Parliament moved to its permanent home on Capital Hill when Queen Elizabeth II opened “New” Parliament House. 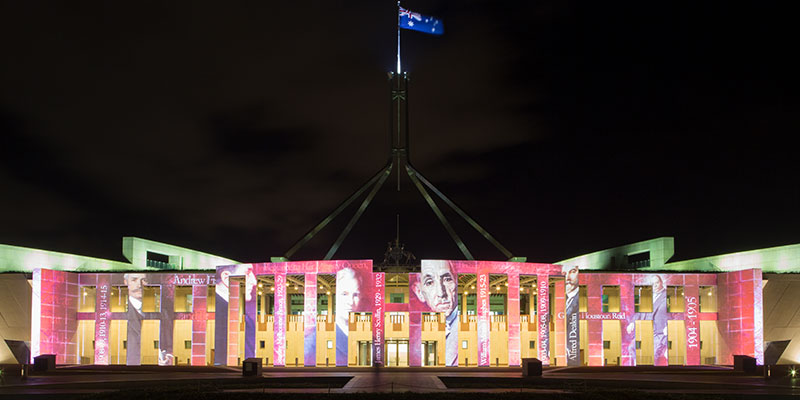 What is the best season to visit the ACT?

A very useful tool for working out the best season to go bicycle touring in Canberra, the ACT or the surrounding regions of NSW is the climate zone model defined by the Australian Building Codes Board (ABCB).

The ACT experiences two of the 8 climate zones defined by the ABCB with the city of Canberra falling within Climate Zone 7 - Cool Temperate. The area of the ACT that is within Climate Zone 8 – Alpine, falls within Namadgi National Park and is unpopulated. 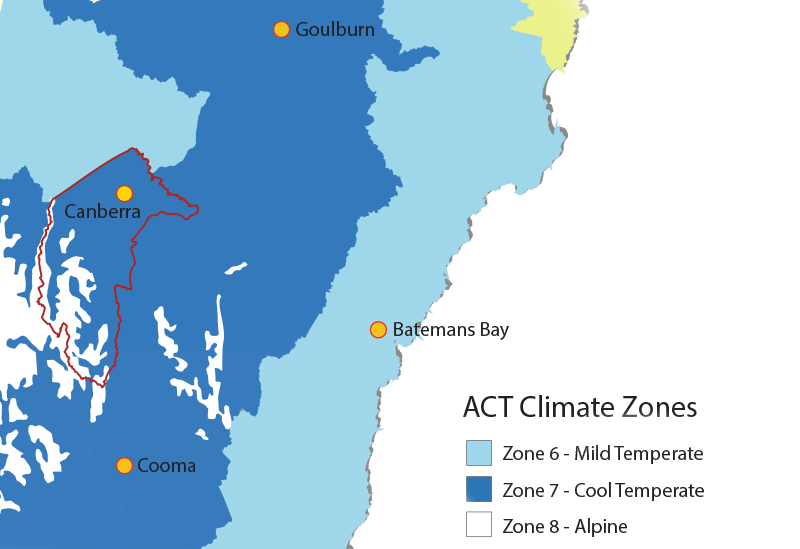 When planning your cycling trip to Canberra and the ACT you may wish to consider:

What is the best time to visit the ACT?

High season or peak holiday times in the ACT are linked to the territory’s school and public holidays. Mostly these are the same, with some slight variations, as the other Australian states and territories. More information about high and low seasons, including dates, can be found in our answer to the question - “What is the best time to visit Australia?”

How to stay safe in the sun?

The Australian sun can be extremely intense, which means if you do not take appropriate precautions prolonged sun exposure can be bad for your health. In fact, Australia has the highest level of skin cancer in the world. To avoid getting burnt by the sun, follow the 5 SunSmart rules – Slip, Slop, Slap, Seek, Slide.

What are Summer Heatwaves?

Summer brings an increased likelihood of extreme heat waves where very hot days are followed by hot nights making it hard for your body to cool down. Even fit and healthy people can become very ill during these periods, therefore, if you are on a cycling tour you should avoid strenuous activity during times of extreme heat. If untreated, heat illness can lead to the more serious and potentially life-threatening condition of heat stroke. Heatwaves should not be underestimated as they cause more deaths in Australia than any other natural hazard.

All sporting organisations in Australia have hot weather guidelines that they use to determine if a sporting activity needs to be modified or cancelled during periods of hot weather.

It is not uncommon for the Tour Down Under to shorten its competitive stages and cancel the community rides during heatwave conditions.

When is the Bush Fire Danger period?

In New South Wales summer also brings an increased risk of bush fires. If you are planning a bike ride during the bush fire season it is important that you monitor the Fire Danger Rating each day. This will help you assess your level of bush fire risk so you can plan what to do if a fire was to start near you. It is important to understand that the Fire Danger Rating IS NOT a predictor of how likely a bush fire is to occur but an indicator of how dangerous a bush fire may be if it does occur.

A cyclist’s guide to road rules in the ACT

Australians ride and drive on the LEFT SIDE of two-way roads.

Under the Australian Road Rules a bicycle is considered a vehicle and as such cyclists have the same responsibilities and rights as other road users. Some road rules are specific to bicycles and these vary between the states.

An explanation of the road rules and how they apply to cyclists in the Australian Capital Territory can be found here.

Supported cycling tours in the ACT

Mulga has a full calendar of supported Australian bike tours that fit with the seasons and optimum touring times. Tours vary in length from 3 to 12 days with daily distances averaging 70km.

Every Mulga tour is achievable by the average cyclist with the focus on enjoying each day, not stacking up the kilometres or racing the clock. Our goal is to soak in the scenery, marvel at fascinating stories, then recharge the batteries with a good feed and a good rest.

If none of these bicycle tours in the ACT suit, or a tour in which you are interested is not currently scheduled, feel free to Contact Us and we’ll work with you to provide a customised or private alternative.

Cycling day tours of Canberra and the ACT