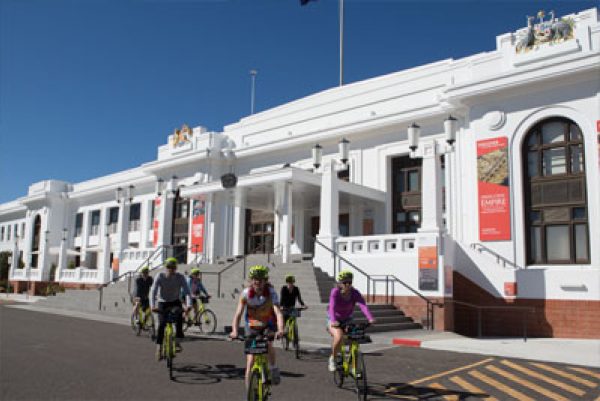 This guided bike tour is suitable for those spending either one or more days in our marvellous city. In the short time available for this tour, many of the places we go are only accessible by bike, so our bicycle tour provides an excellent and quick orientation for all visitors to Canberra.

Since 1988 the city's focal point has been the large Australian flag flying from the stainless steel flagpole on top of Parliament House, the seat of government in Australia. Spread out below is Lake Burley Griffin, the parklands of the Parliamentary Triangle and the homes of many of Australia’s social and cultural institutions. These striking institutions, the government buildings that surround them and the other National Institutions spread throughout the city are there with one purpose in mind - to collect, preserve and share the nation’s stories.

Throughout the tour we will stop to tell stories and take photos.

We stop for lunch at one of the cafes in the new Kingston Foreshore urban renewal redevelopment, which is built on the site of the old industrial area established to build and provide power to early Canberra. On our way we will pass through the Kingston Arts Precinct, home to the Canberra Glassworks and the famous Old Bus Depot Markets.

Explore the historical, political and cultural sites of Canberra on a bicycle. This tour provides an excellent orientation for all visitors to Canberra. Price includes your guide, bike, helmet and a small bike mounted bag to carry your gear.

Payments can be made via Visa, MasterCard or electronic funds transfer.

We run this tour on request.

We prefer a minimum of 48 hours notice and 2 people to run a tour. If you are travelling by yourself please Contact Us as a tour may be running that you can join.

To request a tour please telephone us or use our Contact Us form.

Lennox Gardens car park, which is between Lake Burley Griffin and Flynn Drive behind the Hyatt Hotel Canberra. Click this link for a map.

Relaxed/Easy. We use a mix of shared paths, quiet streets and roads. Mostly flat or with gentle inclines. Suitable for anyone who is relatively fit and knows how to ride a bike.

The price of the tour includes a guide, a bike, a helmet and a small bike mounted bag to carry your gear.

For your own safety you must wear shoes that fit well and cover your entire foot. No high heels please.

A water bottle, sunscreen, and wear comfortable clothes for riding suitable for the weather conditions. We suggest you bring a small amount of money for additional purchases. Do not forget your camera!